Studying the phenomenon of suspense in cultural historical exhibitions lets me ponder a lot about the role of emotions for this medium. One central question bothering me is how to define the point when museum exhibits and settings end to be inspiring and begin to be manipulative.

One piece in the puzzle for gathering answers to this question I found while visiting the exhibition “Obedience” in the Jewish Museum Berlin. This “Installation in 15 rooms” was curated by film director Peter Greenaway and multimedia artist Saskia Boddeke. It tells the story of Abraham who was asked by God to offer his son Isaac to prove his faith. Abraham was willing to obey but was stopped in the last moment by an angel sent from God who was convinced now that Abraham feared him enough. 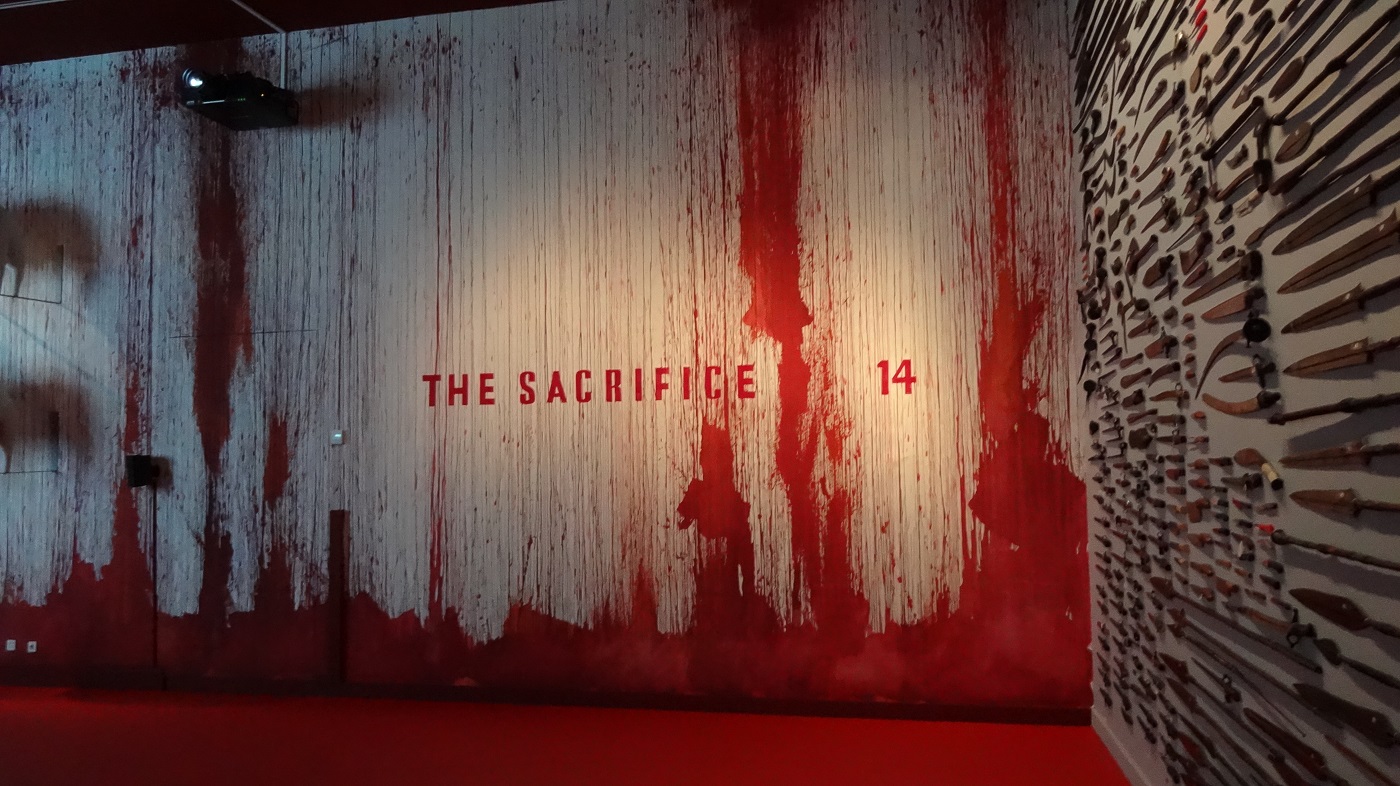 This story is told, step by step, in the first 13 rooms of the exhibition, presenting a mixture of objects, artworks and video projections, strongly staged. One special element is that the story has been translated into dance scenes which express and highlight the relationships between the different agents of the biblical drama.

Entering room 14 (titled “The Sacrifice”) I found myself confronted with three huge screens showing again some of these dance scenes, but mainly pictures of children from all over the world – suffering. Some of them were covered with blood, many of them were crying, some other were fighting with machine-guns. I was moved to tears and thought: “This is so unfair!” and “No child should suffer like this, nowhere, no reason why.” I was still deeply moved passing the last room which is totally covered by newspaper clippings, and huge red letters forming the question: “Or are you an Abraham?”

At the end of my itinerary I had a look at the visitors’ book and read the highly contradictory entries. Whereas one visitor criticised the exhibition as “Beeindruckungsmaschine” (sensation machine) another praised it as “very moving”; whereas the third called the exhibition a “masterpiece”, the fourth one called it “populist overpowering trash”. Only then I realised how strongly I had been manipulated by the presentation of the pictures and clips in room 14 and felt suddenly uneasy. I went back to the screens and asked myself what exactly was the reason for feeling so uncomfortable. 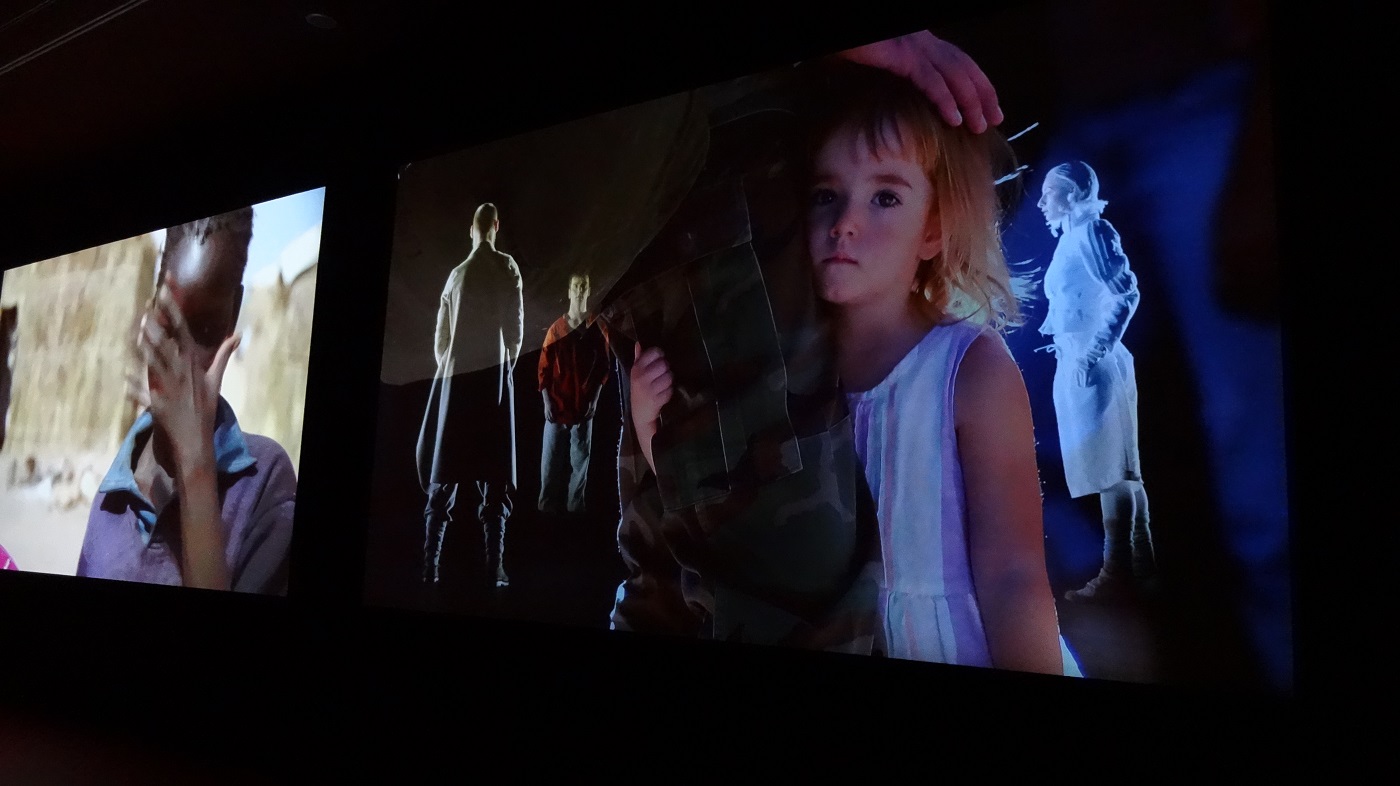 I could still agree with the obvious message of the compilation that to sacrifice a child for whichever reason is wrong. But looking at the presentation for the first time I had experienced it as so sad that this feeling had seemed to be absolutely consequential and therefore without any alternative. Reflecting this process now I realised that there WAS an alternative: there are people who are – for whatever reasons – willing to sacrifice children. I imagined such a person watching the pictures in this room and realised that, at least in theory, there was the possibility of a recipient not being touched by the scenes and not condemning them. In the course of this reflections the last room became more relevant. At the first glance I had found it quite weak because I had seen too many exhibitions where the curators had tried to build a (wobbly) bridge to the presence by using newspaper clippings. But now I thought that the question “Or are you an Abraham?” was not as rhetorical as I had judged it at first. 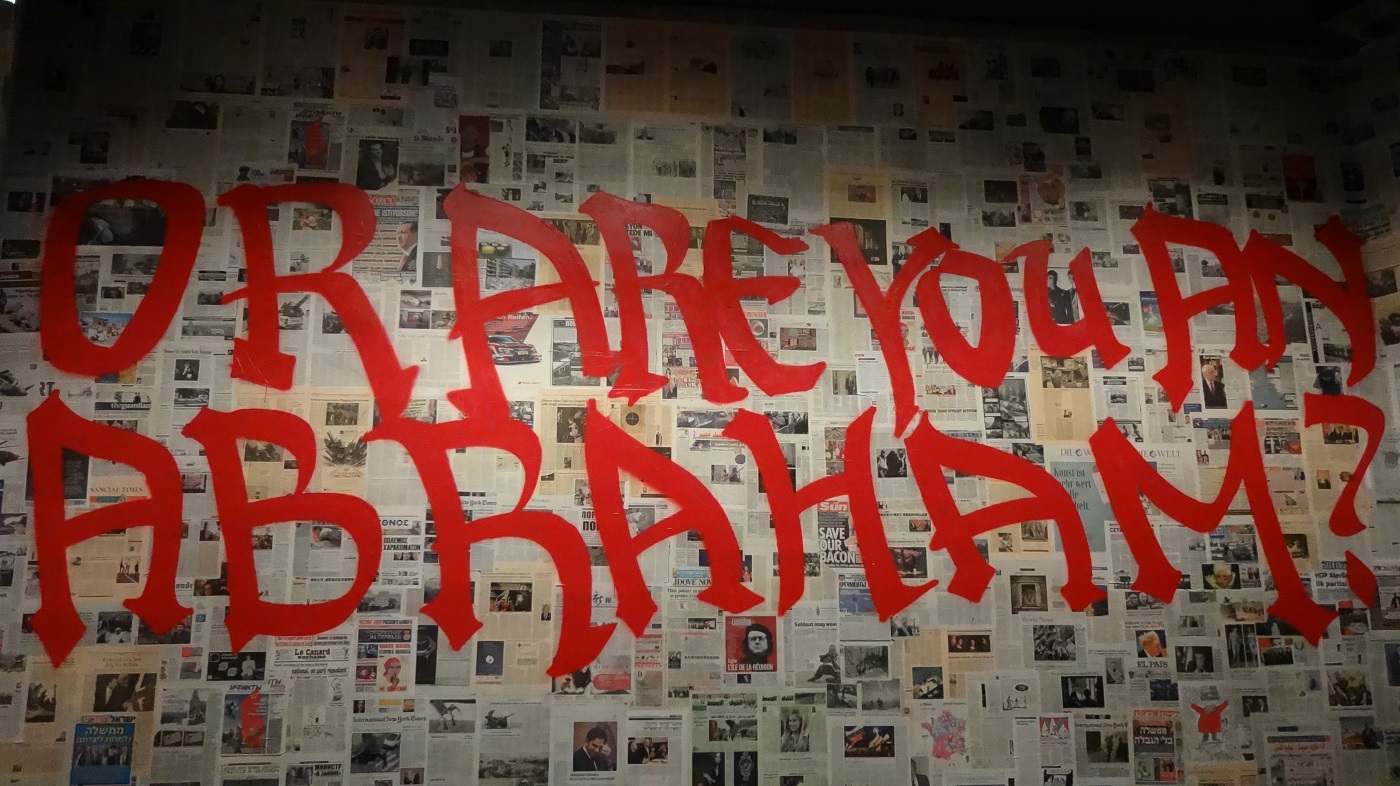 The last room of the exhibition
Photograph by Ariane Karbe

I understand now, looking at my visit with some distance, that the crucial point was not that no alternative feelings were provided, but that feelings were used as arguments. The pathetic presentation (the huge screens, the music, the red colour on the walls, the weapons, the artwork showing sacrificial lambs) of the images created such a strong sensation on my side that it immediately led to a certain opinion. This was the vulnerable point where no alternative was offered by the curators: feeling so sad lead to condemning what I saw and this connection felt (!) logical. Not the quality of the feeling seems to be the key to keeping the difference between inspiration and manipulation but the quantity.

Thanks to the Jewish Museum for the permission to use the photographs.