Last week designer Guido Maria Kretschmer commented in „Shopping Queen“ (a TV-show where five women have to compete in finding the perfect outfit, equipped with a motto, 500 Euros and 4 hours of time) the choice of one of his candidates with „Well done! Black glasses always tell a story!“. I immediately called the story police. These sunglasses may look beautiful, remind you of Audrey Hepburn or protect you from sunlight – but they do not tell a story.

Of course, there are no story police and for good reasons: everybody is free to use terms like he or she wants to and how it suits his or her understanding of a concept. But as a curator I am very much interested in defining “stories” more precisely, because comprehending the nature of narratives seems to me a key to understanding the exhibition medium better. Indeed, the impulse to research exhibition narratives, came from my observation that every second exhibition had been declared to “tell a story”. I always was sceptical if this term was adequate to describe the exhibition medium because in my view an exhibition functions quite different from a book or film.

But instead of complaining about the inflationary and confusing usage of the word “story”, I learned to appreciate it as a great opportunity to learn more about stories’ complexity, thus “edging my tool” as an exhibition maker. And so, yeah, from this perspective, I would have agreed if the story police issued Kretschmer a caution. To explain why I want to leave the field of TV-entertainment and turn to another example: chocolate.

This picture I took in Brussels: 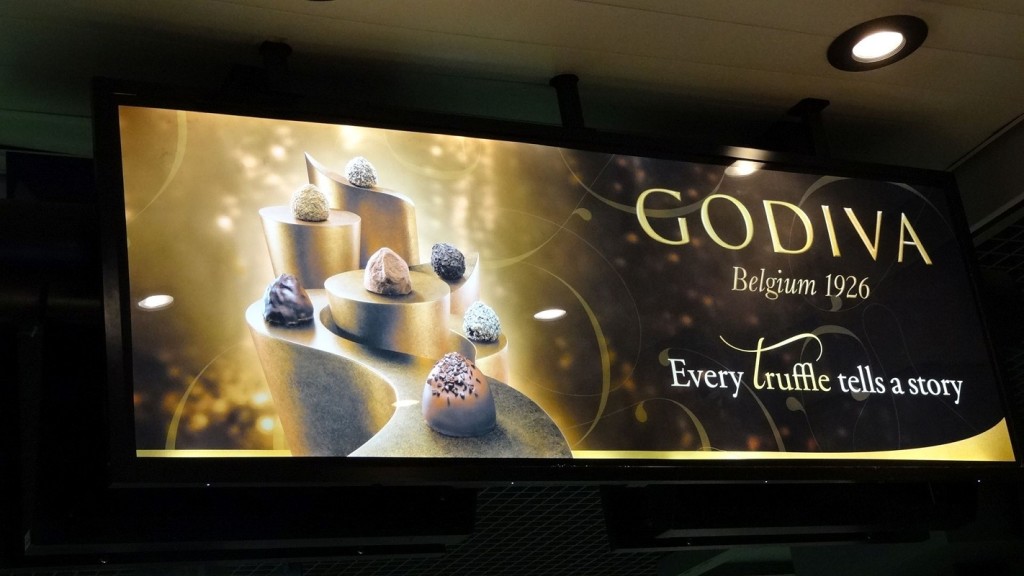 I think that it is useful to speak in this case instead of “telling a story” about “evoking associations”. To make this differentiation is from a curator’s view helpful because, first, one strength of the exhibition medium is exactly to use the associative power of objects – and one weakness is to tell stories. Second, you have to arrange and combine objects in a diverse way, depending on if you intend to tell a story or to evoke associations. Both is due to a core feature of stories and narratives: there are always two events added or linked and a process is involved. To put it differently: something must happen! Or how John le Carré describes it: “’The cat sat on a mat’ is not a story. ‘The cat sat on the dog’s mat’ is a story.”*

Looking at a truffle you may sense “satisfaction” or think of “cocoa beans” or “Valentine’s day” and in an exhibition you could support one of this associations by adding for example a red rose. But even though a visitor looking at these two objects may “invent” a story or remember an incident, on the level of the exhibition no story is told because no process is shown.

To “tell a story” with the chocs would be more difficult because an exhibition is a quite static medium. One possibility would be to show an empty box of chocolate and to place a set of teeth with inlays in the same showcase. O.k., this would not be the most exciting story, but I hope you get the point.

In my view, being aware of such a difference between treating an object as an “associations reservoir” or as an “element of a story” can be hugely useful in deciding how to place, present and combine specific objects in an exhibition.

I think that one (good) reason for applying the term “story” also to the sunglasses or the truffles is, that the transitions are smooth between stories and associations – stories can evoke associations and associations can be linked and used as story elements. Another one is that “story” is a very catchy concept whereas it is more complicated to put associations into words, also because often, situated between feelings and thoughts, floating between subconsciousness and consciousness, they defy any explanations.

So let’s send the story police home – for today.